“In the Blood” Lisa Unger (Simon and Schuster) – novel review 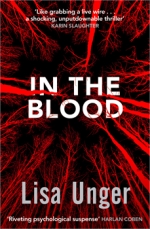 Psychology student Lana gets a part-time job babysitting eleven year old Luke to help his single mother, Rachel. Rachel walks on eggshells around her son, hyper-alert to any sign of a mood change. She explains that Luke has had various diagnoses to explain his tendency to tell lies and try to manipulate people. but none of them fit. This doesn’t ring any alarm bells with Lana who doesn’t even get fazed when she finds a lock on the outside of Luke’s bedroom door. But, then, Lana has her own past traumas and frequently lies to stop people finding out about her past so doesn’t see Luke as being dramatically different from her. She also can’t shake the feeling that both Rachel and Luke seem very familiar although she’s never knowingly met them before.

Lana’s late mother left her with a trust fund, the bulk of which doesn’t kick in until Lana reaches 30. Her late mother’s intention was for Lana to get on her feet and a career underway first. Lana likes the idea of an academic life, one where she’s cossetted and hidden away from the rigours of a wider society. Lana was brought up by her aunt and, while loved, was also painfully aware that her dark, pale features are in direct contrast to her tanned, blonde cousins. Lana’s father is no longer part of her life and is serving a prison sentence for her murder of her mother, a crime he maintains he didn’t commit. He does confess to having a long-term affair and trying to bury his wife’s body in a panic. But Lana’s past doesn’t just involve a father who is prime suspect for her mother’s murder, but also a grandfather who was a convicted murderer. After her mother’s death, she changed her name to Lana and took her grandmother’s maiden name before starting university.

Interwoven with the developing relationship between Luke and Lana is a series of diary entries, written by a mother suffering post natal depression following a traumatic birth. The mother is convinced something is wrong with her son, despite reassurances from her own mother and her husband that he’s “just a difficult baby and will settle”. The mother’s instinct is right: once her son starts school, he doesn’t settle down but gets expelled for bad behaviour. The mother doesn’t use names in her diary just ‘my husband’, ‘my son’, ‘his teacher’, etc. The diary entries could apply to either Luke or Lana.

At college Lana’s friend Beck (Rebecca) goes missing. Initially Lana tries to convince herself it’s nothing because Beck has run away a couple of times before. The police and Beck’s parents are called. The college wants to be seen to be doing everything necessary because, a couple of years previously, another student went missing after arguing with her boyfriend at a party and her body was found at the bottom of a flight of stairs on the outside of an unused building. The incident was treated as an accident as there was no evidence of suspicious activity.

Luke becomes bored of beating Lana at chess and suggests playing a treasure hunt style game. He gives her a key and a poem she has to decode to find the next clue. Lana traces the first clue to an abandoned caretaker’s hut and finds the next clue. This leads her to another abandoned building and a second clue. It’s when she finds the third clue that Lana realises the clues are not Luke’s: he’s conspiring with someone else. She also has to face the fact that Beck had discovered her history and knew about her past and now Luke knows too. Can Lana overcome her denial and face up to her legacy before it destroys her? If Beck is still alive, can Lana find and rescue her before she’s killed?

“In the Blood” isn’t just a convincing thriller, but also asks questions about genetic legacies, particularly mental illnesses and the effects of both illness and stigma not just on the sufferer but also the family. Lana and Luke are sympathetically drawn and very much products of their upbringing. Luke doesn’t just have an inherited psychosis, but has also been brought up to believe his father abandoned him. Rachel blames her lover’s wife for not releasing him to be with her but clinging on to a dead marriage for the sake of appearances. Neither woman seems able to see how this conflict affects their children. Rachel is no more reliable a narrator than her son or Lana. Lisa Unger’s skill in drawing complex, credible characters keep a reader hooked through the plot’s twists and turns.