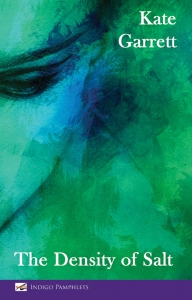 Wandering girls, hints of selkies, Hans Christian Anderson, shaman-like crows and urban jungles give a non-Disney fairytale feel to some of these poems. Their narrator (and the poet) left the US for the UK, touched on in “Eighteen Years Later”

out of these trails, out of my
lungs. The hour is grey

and the world is waiting
for me to put it back together.

I breathe in acres of air,
and the hours I’ve lost.”

It’s a bittersweet victory: a new life but the baggage of the old has to be shrugged off, as explored in “JFK to Heathrow” which ends

“Now the stale night inside the jet predicts
the present: I see him waiting at the end
of the line. Scrying in a plastic cup of California white

as we cruise seven miles above a stretch
of lapis-grey, I leave behind the twinkle
of a city holding on to people who talk like me,
who are less like home than where I’m headed.”

Those last two lines acknowledge that most people don’t leave the city they grew up in, yet the land where everything’s familar is no longer home. Home is a place full of strangers. This is common in people estranged from their families. The displaced young woman is no vulnerable princess but a warrior, in “Kitten,” which hints at the cause of displacement,

“I was the runt of the litter,
shying away from the diamond
boom of her laughter,

and I ran, tumbled
over moss beneath
the weeping willow tree

and climbed higher –
circling her head,
refusing to come down.

Years passed, I landed on my feet –
a scarred tigress, sweating brining
my hair, a flash of broken teeth

and claws snatching the caramel
song from her throat.”

Diamonds are sparkly and attention-seeking but also cold and hard. Their surface reflects so it takes a keen observer to see the stone beneath the sparkle. The “boom of laughter” suggests it was loud for effect and seeking an audience rather than in compassion for the mother’s youngest child who learnt to distance herself. The “broken teeth” suggest internal damage capable of being hidden. In the wild, a tigress with broken teeth is at risk of not being able to feed herself and so becomes vulnerable despite her image as a fearsome predator. Some victims of abuse do create a seemlingly invulnerable outer skin to protect their vulnerability within. There is a happy ending though, in “After Poetry”

“… Your kiss filtered
down through strands
of my hair, tingled there for days
though I told myself nothing
would happen. Now here we are, after dark:
I trace the shape of you in a skylight
out of body but in your arms after
reaching a point when we decide
we’ve said enough.”

“The Density of Salt” measures its tears without sentimentality or self-pity. It uses a dose of myth and fairytale, a generous sprinkle of humour, zest and, most importantly, a youthful sense of curiousity, energising the present.

“The Density of Salt” is available from Indigo Dreams.