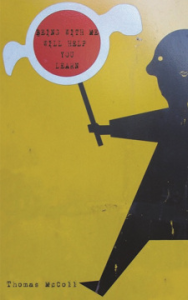 Cheerfully takes a wry look at life: most poets would nod in recognition at “Open Mic”

“I went to an open mic poetry night,
read my poems to rapturous applause,
promoted my booklet,
did not sell a single one.

The following week,
I was back on the open mic,
filled my five minute slot
simply by repeating
‘16 AA batteries for a pound,
16 for a pound,‘
and by the end had sold
one hundred packs.”

Most poetry books are sold at readings and live events but occasionally you get an audience that’s only interested in their own poems and not in listening to or buying anyone else’s. “Green Graffiti” ends after flowers spell out a crude message,

“Police psychologists conclude
that this spate of horticultural graffiti
has been committed by a lone teenage individual
whose background is an explosive mix
of broken home and well-kept garden.”

The poem isn’t just about the juxtaposition of elegance (flowers) and crude messages but also the contrast between the “well-kept garden” and “broken home”. A reminder that some families hide private heartbreak behind a public image of competence and being from a “good” home is no guarantee of a undamaged child. It’s poems like these, with a serious message behind a humorous gloss, that work best.

Occasionally use of language feels sloppy. I got distracted by the irregular rhymes in “Muslim Girl at the Bus Stop”

“Muslim girl at the bus stop,
wearing hijab and headphones,

the fingers of her left hand
click to the beat of the tune,

the fingers of her right hand
adjust the veil, keep in in place,

covering her hair
and perfectly framing her beautiful face.”

The poem’s subject seemed perfectly normal to me so I wasn’t sure what was being communicated. I guess it’s about the normality behind an exotic appearance, that someone can wear a hijab and be a regular teenager, but my reaction was ‘so what?’. In “Sweat Shop” the language is judgmental,

“From Isan, through Phuket, to London,
at a sweat-stitch label’s flag-ship store,
a girth-maddened girl –
belt-brained and vacuous –
stiletto-stabs the floor,
as a plumed assistant
breaks the news:
‘I’m sorry, but there’s no more
of the 10 (that fits your 12) size.‘
Over the speakers, a muzak pop group
sings the wrong-belt-buckle blues,
while a stale-eyed boyfriend –
raked of all patience,
bulged with bags,
sighing a stream of lies –
pretends he loves still
his swell-shocked girlfriend’s
ever-expanding thighs.

On the bus, she gawps at photographs,
which illustrate a token serious article –
on sweat shops and their workers –
in her glossy fashion magazine.

‘The women, look how slim they are‘ she cries.”

Why do readers need to be told the customer is “belt-brained and vacuous” instead of being trusted to work it out? I like the sound of “swell-shocked” but it’s too far away from the shop assistant’s news and so loses impact. I very much doubt the “(that fits your 12)” is voiced by the shop assistant so it shouldn’t be in the speech. The final “cries” is ambiguous, is she shouting or in despair? What’s not ambiguous is that she has not figured out the link between sweat shop wages and thin workers.

Tim McColl is better when his poems feature a dose of surrealism as in “Chalk Fairy” where the narrator draws chalk outlines of rough sleepers,

“I’ve found
that, even in the early hours
of Christmas Day,
there’s no shortage of bodies
to draw my outlines round:
London’s one big crime scene
every single day of the year.”

“Today the street hawker’s selling knocked off smiles from an old battered suitcase in front of Camden station.

‘Hey darling! Why the long face? Come over here and get a smile from my suitcase. What do you mean the smile I sold you last week has begun to fade? My smiles ain’t fake. Didn’t you read the packet? “Happiness not supplied.” You gotta keep recharging your batteries, love. But don’t worry. I’ve got just the thing for you – happy pills, three for the price of two…‘”

At its best, “Being with me will help you learn” strikes the right balance between reassuring and unsettling its audience by presenting a familiar scene – London’s homeless, a street hawker, graffiti – and providing a twist, nudging readers to look at the scene from a fresh perspective. The better poems also have multi-layers – they can be read at face value during a performance but also offer a deeper message when read from the page.

“Being with me will help you learn” by Thomas McColl is available from Listen Softly London Press.

Posted in Book review. Tags: Being with me will help you learn, Listen Softly London, Tom McColl. Leave a Comment »