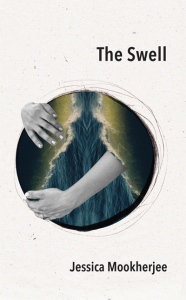 “The Swell” is a fourteen poem pamphlet that explores growing up in Swansea with a Bangladeshi heritage and moving away from a childhood home, most notably in “Red”

“When I first wore red lipstick, smacked across
my face, she said it was inappropriate
for a girl of six, wash it off, she said.
When I first wore that red silk skirt
it mesmerised me by the way it moved
around my legs. It made you smile at me.
Now your face is red, too much sun, too much
beer, too much butter.
I tell you not to wear that red shirt,
it doesn’t flatter.
There’s blood in the bathroom again,
this month.”

Each time the colour appears, it is as a warning sign, a little girl not understanding the significance of lipstick, learning how to dress appropriately in a long skirt, a complexion reddened by excesses, an unflattering shirt and the mark of transformation from girl to woman. The repetition lends a sense of weariness as the girl recognises that her mother has been through this and her grandmother before that.

The title poem looks at the pregnancy of her mother from a child’s viewpoint, noting her father “made a fuss of her for a change” and ends as he

“made milk-dribble jokes for the cameras,
said storms with girls’ names were the deadliest.
Then she emerged, fresh with her slake
of new flesh as the town lugged sandbags,
trying to stop her.”

Even dad can’t upstage mum and older sister is left observing these changes without yet having the words to describe her own reaction. In another poem, A non-mother receives flowers on “Mother’s Day” intended for someone else. She alerts the florist and keeps the flowers in water,

“I didn’t touch them until one week after Mother’s Day.
Wondering if the son, the daughter the mother
would fetch them away and
just as they began pushing out everything, she came.

Heartbroken, relieved, not forgotten. She muttered
polite complaints on my doorstep, told me
her son in the States spent seventy-five pounds
and left, clutching my wilted flowers to her chest.”

Jessica Mookherjee gives readers enough detail to wonder at this relationship between a mother and son where the son has moved to another country, sends an expensive bouquet to his mother but fails to get the address right. That’s where the strength of these poems lie: in the precise details given with enough space for the reader to draw their own conclusions. “The Swell” is a delight to read.

“The Swell” is available from Telltale Press.