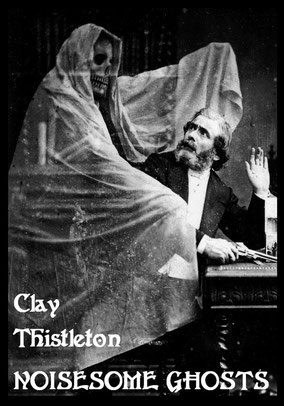 Clay Thistleton uses fragmentary text incorporating music extracts, transcripts of messages, historical and contemporary reports and references to create a hybrid mosaic loosely based on T S Eliot’s “The Wasteland”. The introduction asserts that it’s a book of “scholarship and of poetry” and swiftly followed by a tongue-in-cheek guide to using the book. These ghosts have a very dry sense of humour.

Mr Wineholt, a neighbour suggests, is the former house owner who “gassed himself”. The poem’s narrator tells the ghost she “has rented” the house and tells Mr Wineholt (due to the typesetting, I’ve used an image to reproduce the text),

It’s rather eloquent for a five-year-old Sylvia Plath, if the poem’s narrator is intended to be her, and the references to “gassed himself” and “kitchen” feels like a clever attempt to load a piece with more significance that it deserves. It also reduces the poet to her death. Her work deserves better.

Some ghosts are more contemporary, here travellers in Florida (again, due to the typesetting, I’ve used an image to reproduce the text),

The poem starts with the transcript of the cockpit voice recorder which includes the noise of impact and then takes the shape of a small plane as it explores what a flight attendant’s ghost sees,

The attendant seems to remember the warning given by the flight engineer whose remains he has just recognised. Readers aren’t given the emotional journeys of these ghosts, the poems act as recordings of what the ghosts do or say, effectively inviting readers to fill the blank spaces to create those journeys for themselves.

The writer’s ghost appears, appearing to be in good health, but the words spoken are redacted. However, there’s not enough context to guess what the ghost might have said. The words direct the focus on the irony of a ghost appearing healthier than in life.

The poems are not presented chronologically so a poem from the 18th century might appear alongside one that’s more contemporary. “Sendai Possessions: One of Twenty-Five Tsunami Spirits Exorcised from Rumiko Takahashi (Alias) by Reverend Kaneda of Kurihara, Japan” is set after the 2011 Tsunami and earthquake and ends

The observation, “it is very cold// & there are bodies// all around me” is hardly original but its matter of fact tone is a reflection of shock and someone trying to make sense of something completely beyond their comprehension.

The shape of the text, a sentence presented as an oval, is relevant but also a visual way of distracting from the ordinariness of the observations (“we examined these bites & found on them”, “the impression of eighteen or twenty teeth”, “with saliva or spittle all over them” “in the shape of a mouth very wet”), although it could be argued that the visual provide a pointer to the extraordinary phenomena being presented in passive, scientific record.

“Noisesome Ghosts” is cerebral, rather than compassionate, and its compilation feels like an interesting experiment in danger of taking over its creator. At over 400 pages it does feel too long and is a book to dip in and out of rather than read coherently from start to finish even over several sittings. The time jumps and lack of chronological order give the book the feel that its “Noisesome Ghosts” have interrupted its compilation and disturbed its order. The shaping of text is sometimes logical, for example taking the shape of a plane or using the layout of social media posts, and sometimes appearing to have no logic, for example in “The Ghost of Mr Wineholt” where random larger letters appear, again consistent with the disruption of ghostly figures. It’s a marmite book: it will either appeal to readers or not. If a cerebral exercise in found poems laced with dry wit appeals, “Noisesome Ghosts” is for you.

“Noisesome Ghosts” by Clay Thistleton is available from Bart Books