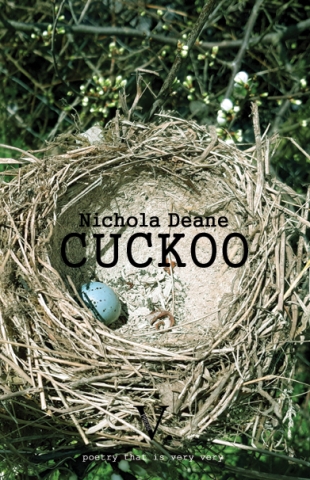 “Cuckoo” implies an outsider, someone who observes and mimics the behaviour of others to appear to fit in despite being aware of their difference. It’s an apt title for a collection of poems which explores and records behaviour through the lens of someone who feels like misfit. In the title poem,

“plight of the new
(Cuckoo,
Cuccu)

to haunt us
back,
to the sleeping

greenwood
(like that? how so?)
with a – wake for a voice,

my loopy echo,
a bit of locus pocus.”

“they saw his clothes, his hair

moving, regiments
still on the march”

An outdoor shower is rigged up while the women of the household are left to boilwash his uniform,

“double-rinsed, mangled
from his sorry kit
with Lifebuoy Soap
all they could
from tunic and britches

not singing as they worked,
those girls,
not singing.”

Singing whilst working has two purposes, it gives a sense of rhythm to the work and relieves monotony, plus it gives a sense of community to the workers. The girls “not singing” is significant: each wrapped in their own thoughts dealing with the shock of what the soldier has gone through, the conditions he found himself in and the normalisation of it. If they were washing off lice, sweat and detritus from his uniform, which he hadn’t done before his return, then these conditions were shared by others and had become routine. The assonance of “i” throughout carries a sense of urgency and anxiety.

In “My Body as Accidental Cassandra” a myth gets a modern twist,

“There is always inflammation somewhere in my body.
So how do I know it today? Well, my right arm prickles
at the elbow like a witchy message being tapped
from the ectoplasm, and an epidermal
splutter occurs, a lava, not out of anything I’d call me,
but from some cellular below
that objects even to glancing contact
with spook substances not visible to my eye,
so much so that histamine in white lumps,
cupolas of agitation, pores of Achilles,
are raised against – what?
What foe? Me vs me?

My friend says Nic, you’re allergic to the 21st century.”

The hurried list of reactions is in contrast to the friend’s interjection, but the list is far too interesting to be written off as plain.

The poems in “Cuckoo” take a familiar scenario and give it a refresh, taking one small detail, such as washer women not singing whilst working, and expands and explores it. Nichola Deane’s work is sensory, vividly bringing alive her subjects. The idiosyncrasy is complementary and not whimsical. The poems wear their craft lightly and give the reader space to engage with and interpret them.

“Cuckoo” is available from V. Press.